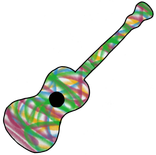 This sounds hard, but it really isn't. You'll be surprised how fast you get used to it. This system is useful for 2 things:
It sounds a lot harder than it is. Just go with the flow the first time through, & think about the theory afterwards if you want to.

Getting started: the one chord trick

There is no 3rd in the chord, so it is neither major or minor. This makes for a dull accompaniment, but it is still useful to know this bit because it gets you started on the idea, & once you know what you are doing:

Suppose you want to play "My Darling Clementine" in the key of G. You need 2 chords:

Start with chord I, & play the bottom string for the first beat in the bar & the other 2 strings for beats 2 & 3. Change to chord V for the parts in bold:

In a cavern in a canyon
Excavating for a mine
Dwelt a miner forty niner
And his daughter Clementine.

You can find lots more simple songs like this on the internet, including:

It doesn't matter that these lists are for different instruments: they are all talking about the same chord patterns. You will soon find your way around.

So what about more interesting songs with more than 3 chords? The first stage is to know where all the other chord roots are in relation top your chosen key note (I). 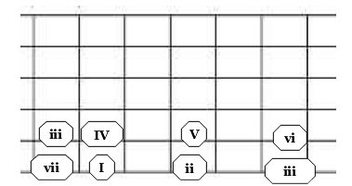 This is the pattern of roots where the scale starts on the 6th string. I've followed the convention of using upper case Roman numerals for the major chords (I, IV, & V) and lower case for the minor chords - more of that later. 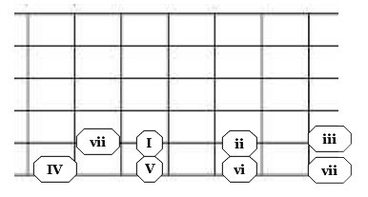 Once you have used the 6th string root for a while, try using this pattern for 5th string roots. Be careful not to start using this one too soon, or you will confuse yourself!

Knowing this pattern as well as the 6th string pattern gives you more flexibility, so you can fit in with the needs of singers or other instruments.
The theory just in case you need to know:

Giving it some life 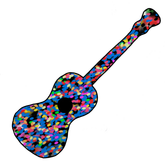 There are 3 basic types of ordinary chord:
If you know these based on the E & A chords (open string patterns), you can get a long way. You can get even further if you know just a few extra, like a diminished chord to use with the vii note of the scale, & a major 7.

You can play with chords or arpeggios in different patterns with your non fretting hand to vary the accompaniment. If that pattern (or the speed of the song) allow, you don't always need to play the full chord.

The charts below show the full chord, chords to use with 4 strings & 3 string versions.

Some people call this the one chord trick, as the shapes for the basic E & A chords are the same, except for the effect of the third between the G & B strings, which shifts everything on that string up a fret. All the other strings are a 4th apart. That is too hard for my brain to cope with at speed when I'm playing a song!

Chords with roots on 4th string

I find it useful to remember the roots on the 4th string as well, using chords based on the D shape with open strings. Even with these chords added in, it is still a lot easier to remember than a chunk of the chord book. The benefits are:

The chords you need

Here are some one page summaries of all you need to know:

How to "translate" songs from a chord book

While you are getting your head round this, it helps to look at some songs you know & write down the chord numbers. You can do this in the sheet music - I've got mine written out in a note book. After the title of the song I've got the first note of the tune, then I've written the chord numbers over the words.

Say you are looking at a song in G major. First write out the notes of the scale (NB, include the sharps & flats). Next to the letters, write the roman numerals. Then just translate the first note & the chords, so:

If your source just has the words and the letters of the chords sometimes it is difficult to work out the key. The easiest thing is to look at the last chord. You will often find it is I.
Google
Accept Cookies?
Provided by OpenGlobal E-commerce